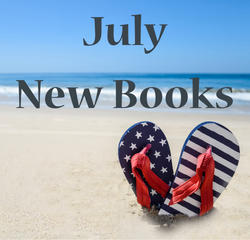 July is full of beach days, pool days, evenings on the porch or deck, and late nights just made for all the summer reads! Below is a list of the best titles being published this month.  Come in to pick them up or place a hold to pick up at a later date. Make sure you sign up for the Adult Summer Reading Challenge, Oceans of Possibilities here: Summer Reading Challenge. It’s running right through this month up until August 19.

Jennifer Ryan. The One You Want

Returning home to act as maid of honor for her best-friend-forever Maggie, Rose is stunned when she discovers that Maggie's husband-to-be is a man with whom she had a one-night stand and, as the big day approaches, must make one of biggest decisions of her life

Embarking on a legendary collaboration launching them to stardom, two friends, intimates since childhood, have the world at their feet until they discover that their success, brilliance and money won't protect them from their own creative ambitions or the betrayals of the heart.

Viola Shipman. The Edge of Summer

After the death of her beloved, intensely private mother, Sutton Douglas, leaving the Ozarks behind, heads to a magical Michigan resort town where she hopes to find answers to the lifelong questions she's had about not only her mothers past but her own place in the world.

Ruth Ware. The It Girl

After John Neville, the man convicted of killing her best friend April 10 years earlier, dies in prison, expectant mother Hannah Jones, after new evidence surfaces proving his innocence, reconnects with old friends to solve the mystery of April’s death and realizes they all have something to hide including a murder.

Hired as superstar actor Jack Stapleton's bodyguard, Hannah Brooks must pose as his girlfriend while visiting his family's ranch in Texas where she finds it easy to protect him, but hard to protect her own, long-neglected heart

In this thrilling story of deception in the world of international fine art, restorer and spy Gabriel Allon scours Europe for the secret behind the forgery of a 17th-century masterpiece that has fooled experts and exchanged hands for millions.