Close Encounters of the Literary Kind: YA Science Fiction 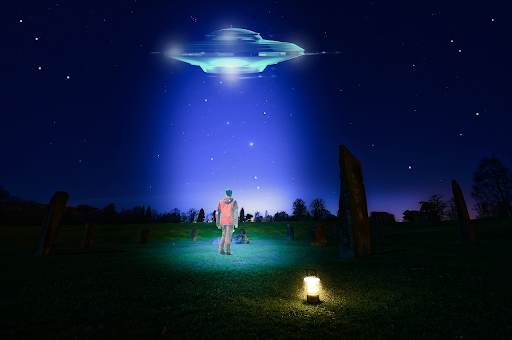 Did you know that July 2nd is World UFO Day?  Neither did I- but what a fun excuse to read a great alien-themed science fiction novel!  Whether you are planning a road trip to Area 51 (it’s a 38 hour drive, so pack a ton of books!), or you just want an entertaining literary diversion during your summer vacation, check out the great books on this list, and enjoy!

The Darkest Star by Jennifer Armentrout (9th & up)

Set in an alternate timeline where an alien race called the Luxen made a failed attempt to invade Earth, this story- the first in a series- introduces an ordinary girl named Evie who meets up with a mysterious boy named Luc.  Their connection leads to romance, suspense, and plenty of surprises!

The Sound of Stars by Alechia Dow (8th & up)

Seventeen year old Ellie lives in an alien controlled center in NYC, where art, books, music, and other creative outputs are forbidden.  Ellie is a bit of a rebel, however, and secretly starts her own illicit library (how fantastic is that!?!).  When her secret is discovered by a young alien commander, his reaction is not what Ellie expected.  Rather than turn her in, Morris reveals his own secret, and the two bond, determined to risk it all to be true to themselves.

When the Sky Fell in Splendor by Emily Henry (6th & up)

Drawn together by the losses they all suffered in a steel mill explosion that took place in their small town five years earlier, a group of teens entertain themselves by chasing down local legends and ghost stories and filming their adventures for their social media account.  When they see strange lights in the sky and set out to discover what is going on, their lives change in unimaginable ways.  Fans of Stranger Things should definitely give this book a try!

We Are the Ants by Shaun David Hutchinson (9th & up)

Henry Denton has had more than he can stand.  His father abandoned him, he is always on the outside being constantly bullied, his boyfriend recently died by suicide, and he’s been abducted by aliens for years- and it just so happens that the aliens have decided that only he can stop humanity from being destroyed.  All Henry has to do is convince them that humans are worth saving.  Unfortunately, Henry is not so sure that they are.

Liv cannot wait to graduate and leave her small Iowa hometown and all the terrible memories behind.  There is nothing here for her.  Years ago, her previously well-adjusted father had a mental breakdown, and was found naked, babbling about being abducted and experimented on by aliens. A few months after that he disappeared for good, and Liv has been biding her time since then, eager to start life anew, far away from Bloughton and the stigma of being the daughter of the crazy alien conspiracy nut.  But when something happens to make her believe that her father was telling the truth, Liv will risk everything to find out what happened to him.

I Am Number Four by Pittacus Lore (7th & up)

John Smith might look like an ordinary teen, but he’s really an alien who has been hiding on Earth for the past ten years, waiting for his powers to emerge so that he can save the remaining members of his people- and the inhabitants of Earth as well.  When a school bully, a beautiful classmate, and an alien from the assassin race that destroyed his home all converge at the same time, continuing a life in hiding isn’t a possibility anymore.  It’s time to fight.

Earth is being invaded- not by little green men, but by toxic plants that grow at an alarming rate, that emit toxic fumes, that form into pods similar to Venus flytraps that can swallow a person whole.  Humanity is in dire trouble- but three kids on a remote island who seem to be immune to the evil plants might hold the key to saving our world.

Nemesis by Brendan Reichs (7th & up)

Min and Noah are two very different teens who share a birthday and a secret- every other year they are murdered on their birthday, but wake up the next day, mysteriously unharmed, miles from home.  How this connects with an impending apocalyptic event, a government conspiracy, and more, makes this a compulsive read.  This is the first in a trilogy where each book is even more exciting than the last!

Skyward by Brandon Sanderson (9th & up)

Spensa Nightshade dreams of flight.  She is determined to be a pilot, just like her father- but since her deceased father has been branded a coward after he supposedly deserted his post during a battle against alien invaders, she has a rough road ahead.  With fierce determination and a little bit of luck, she just might prove to be the key ingredient needed to defeat the Krell and save humanity (and maybe her father’s reputation as well).