Kick Off the Summer With Some Graphic Novel Fun! 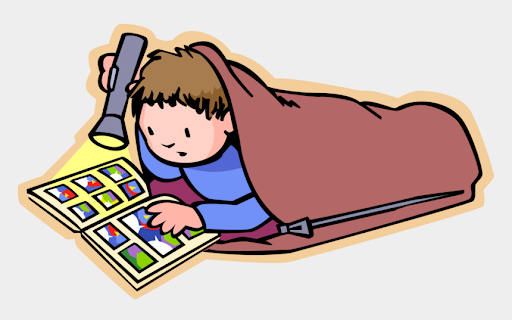 It’s been almost a year since the last Children’s Book Blog post about graphic novels, and I think it’s about time for a revisit!  The graphic novel format is as popular as ever, with great options for younger readers through middle school and beyond!  There are a variety of focuses as well – from original content to reboots of novel series and nonfiction graphic novels.  There’s definitely something for everyone, and hopefully this list will serve as a jumping off point to get your reader immersed in the addicting world of graphic novels!  As always, there are plenty more options in our library, so pop on in and enjoy! 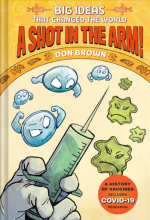 Big Ideas That Changed the World: A Shot in the Arm! (series) by Don Brown (5th grade & up)

From the earliest vaccine for smallpox to the current COVID-19 pandemic, readers will enjoy a wealth of well researched information about the history of vaccines in an attractively illustrated format -- it’s a win/win!  Other volumes in this series include Machines That Think (about artificial intelligence) and Rocket to the Moon (all about Neil Armstrong and the Apollo 11 moon landing)!

Oh my goodness! Could this series be any more fun? The answer is . . . no! It is currently at the maximum amount of fun!  Alligator detectives Mango and Brash are the best at what they do — bad guys, beware! (and fans of Dog Man, take note!) 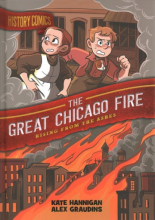 If you know the Science Comics series, then you’ll be thrilled to discover that the creators of that series have started a new venture that focuses on important events in history, such as the Great Chicago Fire of 1871, the Challenger Disaster, The Stonewall Riots, the Roanoke Colony, and others.  Informative and entertaining! 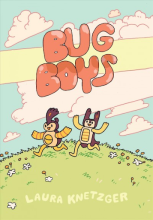 Best beetle friends Rhino-B and Stag-B enjoy many ordinary, weird, thoughtful, and suspenseful adventures that are sure to entertain readers.  The art and writing is charming, and the escapades continue in Bug Boys: Outside and Beyond (available now) and Bug Boys: Adventures and Daydreams (arriving in our library soon!) 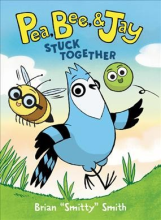 A sentient pea, a bee with glasses, and a blue jay who can’t fly might seem like an unlikely trio, but when Pea needs help returning to his farm house home, the three new friends find that they can overcome any obstacle, and have a lot of fun doing so. 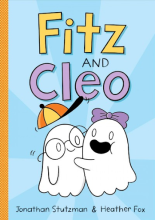 Fitz and Cleo are brother and sister, but also best friends.  Together, they show their bravery by investigating a strange noise in the attic, have a fun outing at the beach, and more.  This duo will steal your heart and have you eagerly searching for more- which makes it lucky that there’s a sequel called Fitz and Cleo Get Creative!

Some popular chapter book series get a graphic novel makeover!

The following graphic titles take stories that have been published in novel format and rework them into comic book style retellings, which make these already popular series even more irresistible! 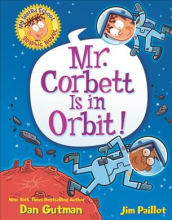 The author and illustrator of the hilarious My Weird School books team up for some new Ella Mentry School adventures -- with a graphic novel twist!  Up to his usual shenanigans, while on a field trip to NASA with his classmates, A.J. accidentally hits the launch button, thinking it’s the “lunch” button -- hey, you can’t blame a kid for being delirious with hunger!  And just like that, an out-of-this-world adventure ensues!

Eight-year-old Jack and his younger sister Annie find a magic tree house that transports them back in time where they experience an amazing adventure amongst live dinosaurs!  Take that, Jurassic World!

Five young dragons discover that they have been chosen to fulfill an amazing prophecy -- it is foretold that they will end the devastating war amongst the dragon tribes of Pyrrhia.  Danger, adventure, and true friendship await them on their perilous journey.

I Survived the Shark Attacks of 1916 (series) by Lauren Tarshis, adapted by Georgia Ball (3rd-6th grade)

During the summer of 1916, Chet Roscow is enjoying some downtime with his new friends at his uncle’s NJ home when he hears about a massive shark attack happening right along the Jersey Shore, not too far from where he’s staying.  Are the rumors true?  And could he be the next victim?