In Their Honor: YA Fiction and the Military 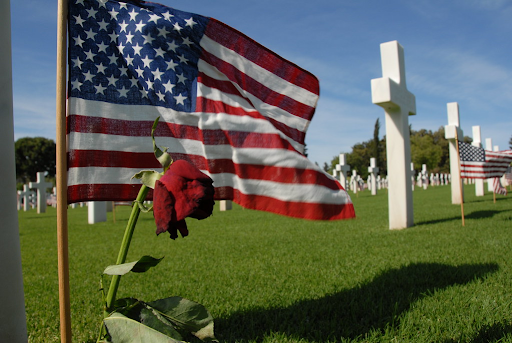 Welcome to the month of May! Warmer weather, blooming flowers, and the promise of weeks of summer freedom just around the corner.  That is definitely reason to celebrate!

May is also a time to celebrate another kind of freedom, though- the hard fought freedom Americans enjoy thanks to the sacrifices of those who have served, or are serving, in our military branches- especially those who paid the ultimate sacrifice.

In recognition of Memorial Day, this month’s list highlights fictional stories that feature characters in the military, and might provide a little insight into the experiences of military personnel along with a page turning tale.

Thank you to all who have served our country.

When her identical twin dies in a car accident shortly after her soldier boyfriend deploys to Afghanistan, Kelsey- despite drowning in her own grief- attempts to reach out to Peter online to tell him the news about Michelle’s passing.  Before she can muster up the courage to speak the horrible truth though, Peter mistakes Kelsey for her twin and expresses how much it means to him to know that despite the horrors that he is facing, “Michelle” is waiting for him, safe at home.  Unable to say the words that will break his heart, Kelsey plays along- starting a communication that builds and blossoms until her heart is unquestionably involved.  Could there possibly be a happy ending in a relationship that has a foundation in tragedy and lies?

I’ll Meet You There by Heather Demetrios (9th gr. & up)

Skylar Evans has her eye on the future.  With a full scholarship to an art school in San Francisco, she cannot wait to leave her claustrophobic hometown in the rearview mirror and finally just be responsible for herself, instead of always having to take care of her alcoholic, unemployed mother.

Josh Mitchell is afraid to face the future.  Coming back to his hometown physically and emotionally changed by his experiences as a Marine in Afghanistan, he cannot fathom what his next step should be.

Drawn together thanks to their jobs at the quirky Paradise Motel, Skylar and Josh form a connection that might shift their perceptions of their past, present, and future.

Despite his family’s financial hardships, Teodoro “T” Avila still has hope for a bright future.  He has a wonderful family, the best friend a guy could ask for, a fledgling relationship with the girl of his dreams, and his beloved older brother is finally returning home from his tour in Iraq.  When Manny returns with PTSD, depression, and violent outbursts, their sister Xochitl convinces her brothers that a sibling road trip is just what they all need.  Their American road trip has the potential to change their lives forever- but whether that will be a good thing or not is to be determined.

When his older brother, a U.S. Army Ranger, is labeled a terrorist, Iranian-American teen Kamran finds his own formally-perfect life falling apart.  With rumors and prejudices bombarding him at every turn, things get even worse when he’s kidnapped by Homeland Security and put under suspicion of treason himself.  Determined to find out the truth about his brother’s allegiances no matter what the outcome is, Kamran embarks on an action-packed thrill ride to hopefully clear his brother’s name. 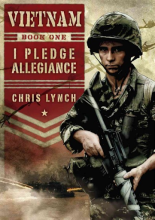 I Pledge Allegiance (Vietnam series, Book One) by Chris Lynch (7th & up)

Since fourth grade, Beck, Ivan, Morris, and Rudy have stuck together, and honored their pact to always look out for each other, so when Rudy is drafted in the Vietnam War, the others enlist as well.  Serving in different branches of the military, each of the boys has their own story in this series, starting with Morris, who signs on with the Navy, and hopes that he can somehow keep his friends from harm in the midst of a bloody and violent war.

Tom Grendel lives in a senior citizen’s community with his Iraq vet father, and occupies himself by writing in his notebooks, helping out his elderly neighbors, and daydreaming about Willow, the girl next door.  It’s a quiet, ordinary life, but he’s content- until Willow’s repugnant brother Rex starts throwing constant wild parties that trigger his father’s PTSD and causes constant uproars in the neighborhood.  Determined to stop Rex, Tom enlisted the help of his sister and his best friend to come up with a series of pranks that are sure to stop Rex in his tracks- but when the retaliatory actions continually raise the stakes, Tom will find that he has quite a fight on his hands. 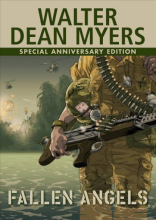 It’s been over 30 years since Fallen Angels was first published, but it still stands the test of time, telling a powerful and emotional story of a Harlem teen who voluntarily enlists in the Vietnam War when his plans of attending college fall through.  Myers does not hold back when he speaks about the horrors of war, the prejudice that Perry faces, and the question of whether the U.S. should have fought in Vietnam at all.  There is much to think about in this impressive, well-told tale.

Based on the true story, Soldier’s Heart is about a 15 year old boy named Charley Goddard who enlisted to fight in the Civil War, eager for a grand adventure.  Four years later, Charley’s time in combat is over, but the things he saw and the events he experienced will haunt him for years to come.  Though set around 160 years ago, this soldier’s perspective on war will likely still resonate with those in the armed forces today. 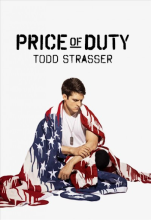 A member of a proud military family, Jake Liddell enlisted in an unnamed war right out of high school and returned a hero; injured but revered.  Considered a certainty to receive a Silver Star, he is celebrated by friends, family, and strangers alike- but no one wants to know about the price of duty, the choices that haunt him, the sacrifices he made, the people he left behind.