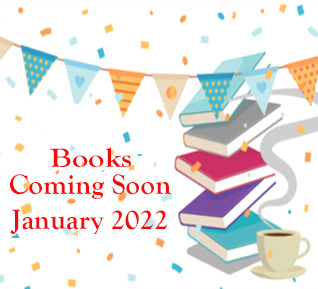 Start the new year off with one (or more) of our promising reads this January! Here are some highlights.

Nita Prose. The Maid. In this debut from a longtime editor in the publishing industry, 25-year-old maid Molly Gray has always had trouble reading social signals. She used to depend on her recently deceased gran to help her, but she’s on her own when she finds a guest murdered in bed and is compelled to investigate; the police have tagged her as the most likely suspect. Subject to a blazing auction, this locked-room mystery has been optioned by Universal, with Academy Award–nominated Florence Pugh attached to star.

Danielle Steel. Invisible. In Steel’s latest, a young woman who survived a neglectful childhood by hunkering down can remain Invisible no longer when her dream of becoming a film director unexpectedly puts her in front of the camera.

Christopher Golden. Road of Bones. In this latest from New York Times best-selling and Bram Stoker award-winning Golden, a film crew is investigating a ghost story more haunting than most. The setting is the Kolyma Highway, which runs through Russia’s Far East, and the bodies of the thousands of gulag prisoners who died building it are interred beneath its gravelly surface. With a 60,000-copy first printing.

Fuminori Nakamura. My Annihilation.  “Turn this page, and you may forfeit your entire life.” What would you do if you read those lines? Can reading a diary implicate its interrogator in a terrible crime? Can an offhand suggestion turn someone into a murderer? These are the questions carefully weighed by award-winning Japanese author Nakamura in his latest literary noir.

Isabel Allende. Violeta.  In this latest from Allende, winner of multiple lifetime achievement awards, Violeta is born into a family boasting five boys just as the 1918 influenza hits her South American homeland. The narrative carries her through 100 years to a new pandemic, encompassing the Great Depression (with her capsized family forced to resettle in her country’s remotest reaches), the fight for women’s rights, and the rise of dictators, plus love, loss, poverty, wealth, and brimming-to-the-rim affairs. Formatted as a letter to someone for whom Violeta cared deeply.

In The Magnolia Palace, the New York Times best-selling Fiona Davis parallels the lives of two women: Lillian, a celebrated artist’s model in New York who loses her mother to the 1918 influenza and ends up working as secretary to the industrialist Henry Clay Frick’s imperious daughter, and Swinging Sixties English model Veronica, who discovers hidden messages while posing at the Frick Collection that lead her to a mystery surrounding the Frick family.

Marie Benedict. Her Hidden Genius. Rosalind Franklin has always been an outsider―brilliant, but different. Whether working at the laboratory she adored in Paris or toiling at a university in London, she feels closest to the science, those unchanging laws of physics and chemistry that guide her experiments. When she is assigned to work on DNA, she believes she can unearth its secrets. Rosalind knows if she just takes one more X-ray picture―one more after thousands―she can unlock the building blocks of life. Never again will she have to listen to her colleagues complain about her, especially Maurice Wilkins who'd rather conspire about genetics with James Watson and Francis Crick than work alongside her. Then it finally happens―the double helix structure of DNA reveals itself to her with perfect clarity. But what unfolds next, Rosalind could have never predicted.

James Rollins. The Starless Crown. In this first in a new series from master-of-thrills Rollins, a top-of-the-class student predicts an apocalypse and is promptly sentenced to death. She goes on the run with a crew of motley souls now finding purpose in their lives: a disillusioned soldier, a dissolute prince ducking out of his older brother’s shadow, and a thief who uncovers an artifact that could change the world. With a 500,000-copy first printing.

Sequoia Nagamatsu. How High We Go in the Dark.  A product of more than 10 years’ labor, this novel will ring out sharply in today’s pandemic world. In 2030, archaeologists troweling through the Arctic Circle’s melting permafrost discover the well-preserved remains of a girl who evidently died of an ancient virus. The plague thus unleashed harries generations, as people find new ways to mourn. There are funerary skyscrapers and hotels for the dead, interstellar starships (the better to find a safer place), and a theme park for terminally ill children where an employee falls for a mother desperate to hold her child one last time. With a 100,000-copy first printing.