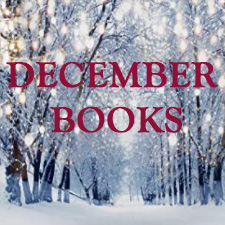 Grab some hot cocoa and a comfy throw, and warm up to a book or two from our curated December 2021 book drops. This month we have a wide assortment of new books that might interest you.

Sosuke Natsukawa. The Cat Who Saved Books. Book-loving high school student Rintaro Natsuki is on the verge of selling the secondhand bookstore he inherited from his grandfather when a talking cat named Tiger appears and demands his help in rescuing misused books from their cruel or oblivious owners. This is a wonderful story that helps you deal with grief, love, and acceptance, and a perfect book to read as a pick-me-up or to give a friend when they are struggling because sometimes all you need is the guidance of a cat.

Christopher Fowler. London Bridge Is Falling Down. Here’s another peculiar crime for detectives Arthur Bryant and John May, whose escapades have won their creator the CWA’s Dagger in the Library Award. Ninety-one-year-old Amelia Hoffman has died a lonely death in her top-floor flat, evidently a victim of social-services negligence. But our detectives know that Amelia belonged to a group of women doing below-the-radar work for the government, and the entire group may be in danger.

Rex Pickett. The Archivist.  Archivist Nadia Fontaine is found drowned, and Emily Snow is called in by Regents University to finish the job Nadia started: organizing the papers of Pulitzer Prize-winning, Nobel-bruited Raymond West, whose heiress wife is preparing to donate a substantial sum to the university’s library. From the author of Sideways, basis of the Academy Award–winning movie.

Wanda Morris. All Her Little Secrets. An Ivy-educated Black lawyer in Atlanta, Ellice Littlejohn has just stumbled upon the dead body of her wealthy white boss, with whom she had been having an affair. Then she discovers suspicious dealings inside her own company. Corporate attorney Morris offers a debut mystery strong enough to be named the publisher’s Lead Read for the season. With a 150,000-copy first printing.

Spotswood, Stephen. Murder Under Her Skin: A Pentecost and Parker Mystery.  PI Lillian Pentecost and her assistant, Willowjean “Will” Parker are back on the case in Spotswood’s follow-up to Fortune Favors the Dead. Here, they investigate when the Amazing Tattooed Woman of Hart and Halloway’s Travelling Circus is stabbed in the back. As the case unfolds, they find themselves in a sleepy Southern town full of grudges.

Darby Kane. The Replacement Wife.  With one dead wife and one missing fiancée, brother-in-law Josh looks like a murderer to Elisa Wright, who's worried about both the fiancée (a good friend) and the well-being of the woman Josh is now dating. From the author of the internationally best-selling Pretty Little Wife, with a 100,000-copy paperback and 30,000-copy hardcover first printing.

Andrews, Brian & Jeffrey Wilson. W.E.B. Griffin Rogue Asset. When the secretary of state is kidnapped from his Cairo hotel, President Natalie Cohen decides to revive the Presidential Agent program, calling Charley Castillo out of retirement to help. Charley is directing an agent fondly nicknamed Killer McCoy, and together they head to Egypt on a rescue mission.

On the biography front we have two-time Emmy Award winner Sharon Gless (Cagney and Lacey) recounting her five decades in Hollywood in Apparently There Were Complaints (75,000-copy first printing).