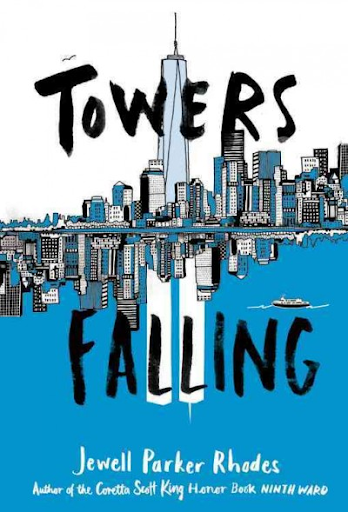 The tragic events of September 11, 2001 happened 20 years ago, and there is a whole generation of children who have no direct personal knowledge of this pivotal event and how it shaped so many aspects of our society.  Exposing them to fiction and nonfiction about that day is an important way to encourage their understanding and empathy about that time period and its effect on our American culture.  We encourage you to share these titles with your children, and be open to questions and discussions about this difficult time in our history. 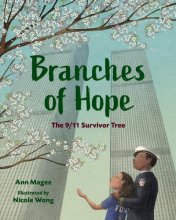 Based on the true story of the Callery pear tree that was rescued from Ground Zero and replanted back there a decade later, this is an inspiring tale of perseverance after tragedy, and finding hope in unexpected places.  For more on this topic, you can also read This Very Tree by Sean Rubin (J974.71 RUBIN), or keep an eye out for Survivor Tree by Marcie Colleen (coming out 8/31/21). 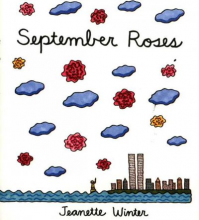 On September 11, 2001, two sisters from South Africa landed in NYC with 2,400 roses ready for presentation at a flower show.  They landed in the midst of the chaos of the attacks on the World Trade Center.  Stranded, they are offered shelter by a kind stranger, and decide to return the kindness by using their flowers to create an homage to the Twin Towers, something they hope will bring a little bit of peace to a city in mourning.  This tale is inspired by an actual encounter, and is a tiny treasure that evokes a feeling of hope and human connection. 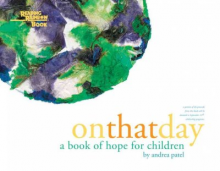 On That Day: a Book of Hope for Children by Andrea Patel (PreK- 2nd gr.)

Learning about the pivotal, but sad events of 9/11 is important, but so is remembering the good that can come out of tragedy.  This book reminds us that while terrible things happen, we can always find something -- or someone -- to give us hope. 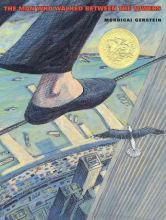 The Man Who Walked Between the Towers by Mordicai Gerstein (K - 6th gr.)

This Caldecott award-winning picture book highlights a historic event in 1974, when French trapeze artist Philippe Petit snuck up to the top of the south tower of the World Trade Center and, using a bow and arrow and a partner to string a cable to the north tower, began walking across the dangerous and narrow improvised path.  Suspenseful and entertaining, with wonderful illustrations, this story celebrates not only this daring event, but also the iconic structures that are now gone from the NYC landscape. 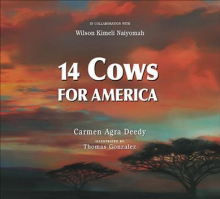 The collapse of the Twin Towers was an event that did not just impact New Yorkers, or even Americans, but also touched the hearts of people all around the world, as is evidenced by this moving nonfiction picture book.  On 9/11/2001, a young man from Kenya named Kimeli Wilson Naiyomah, who was attending college in America, was witness to the attacks on the Twin Towers.  When he returned to visit his Maasai village and told his tribe about the tragedy, his community felt compelled to find some way to reach out and show kindness and empathy to those in mourning. 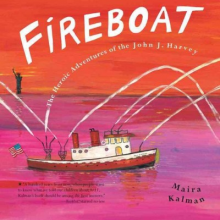 Fireboat: the Heroic Adventures of the John J. Harvey by Maira Kalman

Launched in 1931, the John J. Harvey fireboat was instrumental in helping save countless lives, during numerous tragedies.  After many decades of use, the fireboat was finally set to be retired -- only to be called back into official service one last time to provide critical assistance on September 11th, 2001. 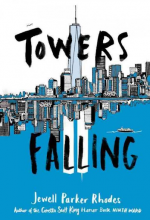 What does 9/11 mean to a kid today?  Deja has enough to deal with when it comes to family challenges, being the new fifth grader at school, and feeling like her life is out of control.  She doesn’t need to concern herself about a tragedy from the past that has no bearing on her present life; but when her teacher assigns a unit on the events of September 11th, she and her new friends discover that the ripple effect of that tragic day so long ago have carried through to her own family today. 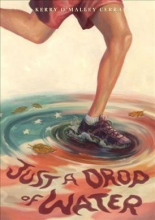 Jake and his best friend Sam find their lives turned upside down when prejudice, lies, and secrets show that the repercussions of the 9/11 attacks have reached their small Florida town.

Popular middle grade author Gratz takes on the subject of 9/11 with a tale told with dual story threads.  In one, Brandon chooses the wrong day to visit his father’s work on the 107th floor of the World Trade Center.  When an airplane strikes the tower, will he be able to survive?  On the same day, 18 years later, Reshmina comes across a wounded American soldier in her battle torn Afghanistan village, and must decide if she should put her and her family’s lives first, or help Taz despite the potentially deadly consequences.

September 10th: the children return to their homes and their lives go on as usual.

September 11th: everything changes, and readers find that their worlds link together in surprising ways.