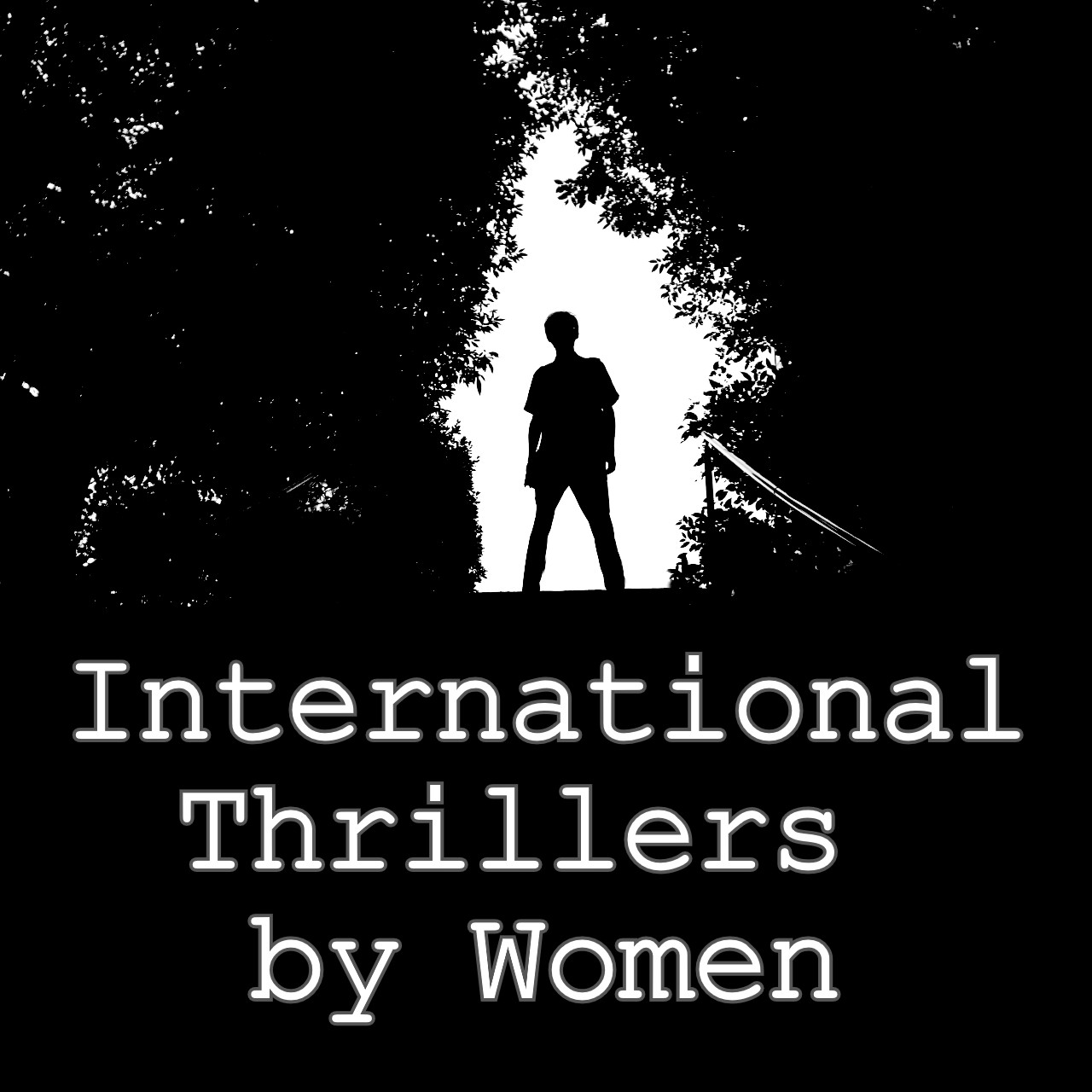 Female authors are increasingly making their mark on the thriller genre, but that's not only true in the United States. This month we're highlighting international thrillers by women. Be sure to check out the display near the adult services desk for more titles!

Fans of unreliable narrators will enjoy this story of self-investigation, which begins as Yu-jin wakes to find himself covered in blood with his mother's murdered body nearby. Diagnosed with epilepsy and unmedicated by his own choice, Yu-jin has gaps in his memory. Yu-jin's troubled relationship with his mother and his own dangerous obsessions, gradually revealed, make it clear that he may have been capable — but is he culpable? Even he isn't sure. Familial and psychological dysfunction keep the mystery tense throughout. Jeong has received acclaim in both Korea and Germany for her tightly-plotted thrillers.

A Climate of Fear by Fred Vargas (France)

The investigation starts simply enough, with a suspicious supposed suicide. But the deeper Commissaire Adamsberg looks into the case, the more complicated it gets. Another suspicious death — a friend of the first victim — leads him to uncover connections to a secret society and an ill-fated trip to Iceland years before. A Climate of Fear, though it can be read alone, is part of the Commissaire Adamsberg series, so if you enjoy this book, there are more available in the same vein. Fred Vargas is the pen name of Frédérique Audoin-Rouzeau, who is a historian and archaeologist in addition to her work as an author.

A Madness of Sunshine by Nalini Singh (New Zealand)

A Madness of Sunshine begins with the tried-and-true thriller trope of an adult returning to their hometown and having to confront past secrets as well as present mysteries (like Jane Harper's The Dry, set in neighboring Australia). Anahera Rawiri returns to the small town in New Zealand where she grew up after learning some unpleasant surprises in the wake of her husband's death. When a teenager disappears in a manner reminiscent of three disappearances that happened in her youth, Anahera teams up with recently transferred policeman Will Gallagher, whose investigation is held back by the fact that he is still considered an outsider in the community. Best known as a paranormal romance author, Singh has recently branched out into crime thrillers set in her home country of New Zealand, to considerable acclaim.

The Sinner by Petra Hammesfahr (Germany)

Like The Good Son, The Sinner deals with what the protagonist fails to remember. Cora is an unlikely murderer, but her guilt is not in doubt: there were many witnesses when she stabbed a man while at a lake with her family. She is as baffled by her action as Police Commissioner Rudolf Grovian, who is sure that there is more to the case than meets the eye, and becomes determined to uncover motivations in Cora's suppressed memories of trauma from years before. The Sinner was also adapted (and relocated from Germany to America) in the first season of the popular television series of the same name, which starred Jessica Biel and Bill Pullman.

Djinn Patrol on the Purple Line by Deepa Anappara (India)

Part mystery and part coming-of-age story, Djinn Patrol on the Purple Line follows a group of children investigating the disappearances of their peers in a slum in India. Jai, the main protagonist, is inspired to solve the mystery by crime shows, and is aided by his friends Pari and Faiz as the case of one missing child turns into a series of disappearances and possible murders. The bleakness of the situation as the story unfolds is softened somewhat by the perspective and magical thinking of the young characters. Anappara won the Edgar Award for this recent literary mystery, informed by her previous work as a journalist.

The first volume in the Inspector Sejer series, Eva's Eye follows the investigation of two deaths in Oslo (the murder of a sex worker, Maja, and the subsequent death of a missing industrial worker, Egil). Sejer is convinced there is a connection, due to the timing of Egil’s disappearance, and the appearance of Eva, a struggling artist and single mother. Eva's Eye follows various different characters, and Eva herself is flawed but not entirely unlikable. After a slow start to the investigation, Fossum segues into a flashback for a series of revelations both expected and surprising. Later books in the Inspector Sejer series have won various awards, including the LA Times Book Prize in the mystery/thriller category for The Indian Bride.

Told from multiple overlapping points of view, Confessions plays with the subjectivity of motivation and perception as it winds through the aftermath of a child's tragic death. A middle school teacher's young daughter has died, and the police have ruled it an accident — but was it? In a speech to her students on the last day of school, and her last day before retiring, Yuko Moriguchi accuses two of her students of involvement in her daughter's death. What follows is a twisted tale of guilt, madness, and revenge. Minato is regarded as one of the foremost writers of "iyamisu," short for "eww mystery," dealing with the shocking dark side of human nature. (For a more familiar literary point of reference, the Japanese edition of Gone Girl was marketed as iyamisu.)

Thursday Night Widows begins with a crime — the dead bodies of three wealthy men found in a pool in a gated community outside Buenos Aires — and then circles back to show us what led up to it. Mainly told through Virginia, a real estate agent and one of the few career women in The Cascade, Thursday Night Widows explores societal as well as interpersonal motivations as cause for the tragic and mysterious event. In addition to a social critique specific to Argentina, the book's depiction of The Cascade has a lot to say about wealth, isolation, conformity, and hypocrisy more broadly. Piñeiro won the prestigious Clarín Prize for this book, as well as the Sor Juana Inés de la Cruz Prize for her novel A Crack in the Wall.

My Sister, the Serial Killer by Oyinkan Braithwaite (Nigeria)

Also available as an ebook or eaudiobook

My Sister, the Serial Killer, as the title suggests, is not a mystery about figuring out who the killer is, but rather how those around them deal with knowing. Korede's relationship with her beautiful, charming younger sister would be fraught enough even without the fact that Ayoola has killed her last several boyfriends, and Korede has helped her hide the evidence. But the stakes get even higher when Ayoola sets her sights on one of Korede's coworkers — and one to whom Korede herself is attracted. Darkly funny as well as suspenseful, My Sister, the Serial Killer explores familial devotion and dysfunction taken to extremes. This novel won the Anthony Award for Best First Novel as well as the LA Times Book Prize in the mystery/thriller category.

The investigators in this mystery, set in the Philippines, are not your average detectives: Gus Saenz is a forensic anthropologist, Jerome Lucero is a clinical psychologist, and both are Jesuit priests. As they investigate the gruesome serial murders of young men in the Payatas slum outside Manila, Saenz and Lucero find themselves working against political and church corruption as well as against the unknown killer. While it was expanded in a new edition in 2015, the original novella edition of Smaller and Smaller Circles won the Philippine National Book Award, the Don Carlos Palanca Grand Prize for the English Novel, and the Madrigal-Gonzales Best First Book Award.

Also available as an ebook

The first volume in the Embla Nyström series, Hunting Game finds Swedish Detective Inspector Embla Nyström off-duty at an annual moose hunt, where a series of strange mishaps culminates in the disappearance of two of her fellow hunters. The focus soon changes from hunting moose to hunting a killer — a feat for which Nyström is equally equipped. Nyström is a complex protagonist, plagued by anxiety but capable and decisive in the field. Helene Tursten is also the author of the popular series following Detective Inspector Irene Huss, where Embla Nyström had previously appeared as a supporting character.

The Body Snatcher begins with the unnamed protagonist, recently laid off and in dire need of cash, witnessing a small plane crash into a river. It's too late to save the pilot, but not too late for the narrator to benefit. And what's the harm in stealing from a dead man, right? Wrong, as seasoned readers of the genre will know to expect. As it happens, he has accidentally stolen a shipment of drugs, and the owners expect him to pay. The narrator is quickly drawn into gang debts and further bad decisions made out of desperation, to say nothing of problems in his interpersonal life, with tension ratcheting up quickly despite the short page count. Readers may recognize classic noir tropes at play, but Melo still has a few surprises in store.