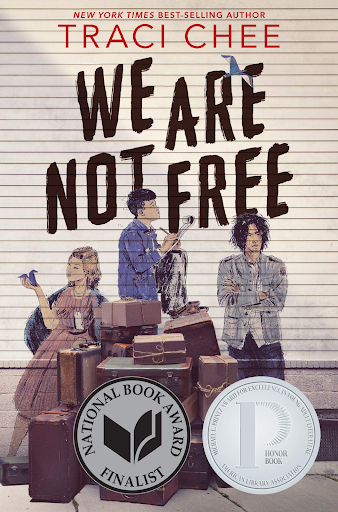 Welcome, May! The weather is warming up, summer vacation seems to be right around the corner, and Asian American and Native Hawaiian/Pacific Islander Heritage Month is here!  What a lot to celebrate!

Especially now, with the recent increase of hate and harassment towards Asians and Asian Americans, it is more important than ever to recognize the wonderful contributions that Asian Americans, Native Hawaiians, and Pacific Islanders have made to American culture in the past, in our present, and will contribute in the future.

Listed below are some books to get you started, but there are so many other stories that highlight AAPI voices in our collection, so please feel free to visit us so you can immerse yourself in more wonderfulness!

Based on the author’s own family history, We Are Not Free is a powerful tale focusing on a group of Japanese-American teens as they are faced with discrimination and mass incarceration in their San Francisco based community shortly after the bombing of Pearl Harbor.  This is a moving story about a shameful time in America’s past, which unfortunately has many connections to recent events.

Taking inspiration from ancient Arabia, this fantasy adventure is not to be missed! Zafira is The Hunter.  Nasir is The Prince of Death.  Both have gained almost legendary status in the realm of Arawiya, but each has secrets to hide, and neither can afford to get too close to anyone and risk their hearts and their secrets.  When rumors of the existence of a relic that can restore magic to the kingdom surface, Zafira and Nasir both seek to find the book -- although one plans to eliminate the other along the way.

Just once, Bijan Majidi dared to stand out instead of doing his best to remain under the radar, and look where it got him.  Thanks to a game winning basketball play, he’s now one of the most popular kids in school, which brings him lots of positive attention, and some harassment as well.  When someone Photoshops an image of him so that he looks like a terrorist, this one act has massive reverberations in the school community, with Bijan caught in the middle.

Darius the Great is Not Okay by Adib Khorram (8th gr. & up)

Darius feels like an all American failure, what with his weight issues, his depression, his apparent appeal to bullies, and more, so he doesn’t imagine that a visit to Iran to connect with his extended family and his personal heritage will change that.  Life just might surprise him yet, though.  After you’ve fallen in love with this story, get ready for the sequel, Darius The Great Deserves Better.

After the fall of Saigon in 1975, Hang and her brother were meant to leave Vietnam and travel together to the United States, but at the last minute, Hang was separated from Linh as he was taken to the US and she was left behind.  Six years later, Hang completes a dangerous journey from her homeland to her new life in Texas.  With the help of a new friend, she immediately sets off on a quest to track down her long-lost brother, hoping that they will one day be reunited.

Emika Chen is smart, talented, and definitely down on her luck. When she hacks into a world famous AR championship Warcross game, she attracts the attention of the game’s creator and is asked to participate in the competition -- a highly coveted opportunity. The game the audience sees is not the only one in play though, as Emika discovers a betrayal that will blow the world of Warcross apart.

Patron Saints of Nothing by Randy Ribay (10th gr. & up)

High school senior Jay Reguero is content to hang out with friends, play video games, and coast through classes until he can graduate, go to Michigan State, and hopefully figure out what he wants to do with his life.  All of his plans are discarded, however, when he learns that his Philippines-based cousin Jun has been violently killed.  Desperate for answers and haunted by his role in the breakdown of their relationship, Jay travels to the Philippines, where he will reconnect with his cultural identity, learn some hard truths about Jun, and discover a shockingly brutal campaign that is being encouraged by the country’s president, Rodrigo Duterte.

Ever Wong’s Taiwanese parents have had her every move plotted since birth.  Feeling like she will never have a say in what path her life will take, she is initially disappointed yet resigned when she is told that she’ll be leaving Ohio for the summer, and will enter an intense language and cultural arts program in Taipei.  As it turns out, however, the program is nicknamed Loveboat, because it is mostly just an excuse for the students to run wild and explore life and love with no supervision or restrictions.  Ever’s going to have quite an educational summer . . .

Frank Li knows that his parents want the best for him, that they sacrifice every day to give him the greatest chance at the American Dream. But their expectations and their demands that he still live in a way that meshes with their traditional Korean beliefs makes Frank feel like he’s being torn apart at times.  When he falls in love with a white girl -- definitely not something that falls within his parent’s acceptable behavior guidelines -- Frank comes up with a plan to please himself and his parents: he and his longtime family friend Joy will pretend to date each other, while actually pursuing relationships with their “unsuitable” significant others.  There’s no way this will backfire on them.  Right?