Music on Our Minds 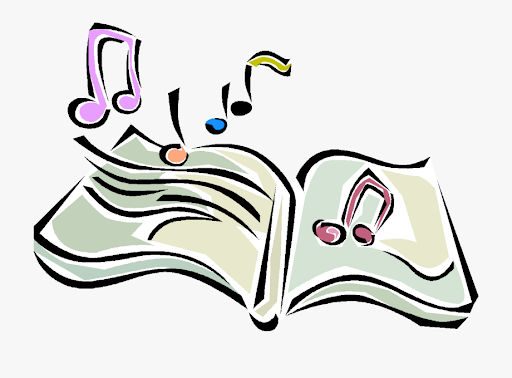 Hello, friends! Here we are, back again for another edition of the SHPL children’s book blog!

For all of you who share the same loves as I do, what do you say that we combine the two?  Here’s a list of books that contain the theme of music woven throughout the story.  I hope that some of these books bring a song to your heart! 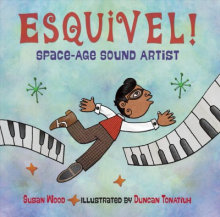 While his childhood in Mexico gave Juan Garcia Esquivel an education in mariachi bands and other traditional music, he yearned to explore a different type of sound.  Unusual instruments, vocal images, and influences from many different musical styles all combine in a way that made a lasting mark on the musical world! 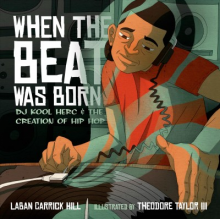 When the Beat Was Born: DJ Kool Herc and the Creation of Hip Hop by Laban Carrick Hill (3rd gr. & up)

In 1973, when his sister threw a back-to-school party to close out the summer, disc jockey Clive Campbell was inspired to play around with the songs and the musical breaks of the records he was spinning, so he could give the partygoers more time for dancing.  His playful creativity led to more experimentation, and Hip Hop was born! 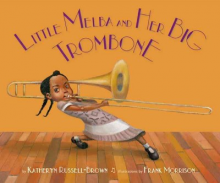 Little Melba and Her Big Trombone by Katheryn Russell-Brown (2nd gr. & up)

From a very early age, Melba Liston loved music.  Many thought a seven-year-old was too young to learn an instrument.  Others said that girls shouldn’t be playing the trombone, and there were even people who tried to intimidate her because of her skin color.  Melba defied them all, and went on to perform on her own, and to compose and arrange music with some of the best jazz musicians of all time. 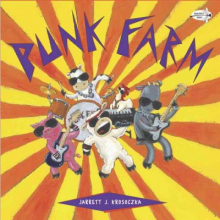 Can’t stop the music! On Old MacDonald’s farm, as soon as the exhausted farmer turns in for the night, it is time to play -- music, that is! With Cow on drums, Chicken on the keyboards, Pig and Goat on guitar, and Sheep as lead singer, the band is ready to rock! 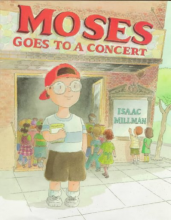 Moses Goes to a Concert by Isaac Millman (Kindergarten & up)

When Moses and his class of hearing-impared students attend an orchestral concert, they are thrilled to discover that the percussionist is deaf as well!  With a lot of effort and determination, the musician has achieved her goal of performing professionally, and her achievement helps to remind Moses that if he works hard, he can achieve big dreams! 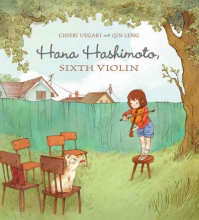 Although Hana has just begun playing the violin, she signs up for the school talent show -- much to her brothers’ disdain.  While they try and convince her that she won’t be good enough, Hana strives to prove them wrong by practicing every day.  When the day of the show arrives, will she be brave enough to share her progress? 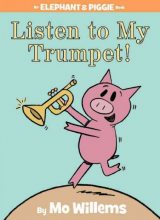 Listen To My Trumpet by Mo Willems (PreSchool & up)

Piggie is so excited about her new trumpet! Eager to play for her best friend Gerald, she is sure that he will be as thrilled as Piggie is! As it turns out though, the sounds that Piggie makes do not really resemble music.  How can Gerald be truthful and still spare Piggie’s feelings?  You’ll find out in the surprise ending!  Want more?  Try What This Story Needs is a Bang and a Clang by Emma Virjan, also in the easy read section! 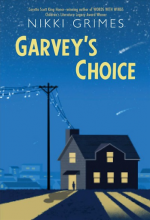 Garvey’s father wants a son who is as obsessed with athletics as he is.  Garvey, on the other hand, loves reading, science, and anything that is not sports.  Constantly forced to deal with bullying at school, and his dad’s disappointment, Garvey is lonely and losing faith in himself -- until he joins the school chorus and finds a way to accept all of his unique gifts.  This is a lovely tale, presented in verse (poetry) format!

Starting middle school can be hard for anyone, but for Amina, it seems especially difficult.  Her relationship with her best friend starts to change, her need to hide her love of singing from her disapproving uncle begins to wear on her, and she begins to feel self-conscious about her Muslim-Pakistani-American culture, fearing prejudice and judgment because of her heritage.  When a despicable act occurs in her community, however, Amina realizes that she can be brave enough to use her voice to show her pride in herself and encourage change in others.

Twelve-year-old Malau might be living in a new city and starting in a new school, but she is not going to pretend that she’s a new person.  It doesn’t matter to her that she’s already on the wrong side of the school’s queen bee, that she’s earned detention on her first day, and that she has already disappointed her mother. Malua is going to be true to herself, and the rest of Chicago will have to get used to skateboarding, zines, Soyrizo, and- most of all -- punk rock!

The Way to Stay in Destiny by Augusta Scattergood (4th gr. & up)

When it is decided that Theo’s grandparents are too old and ailing to continue to care for him, Theo has no choice but to leave everything familiar, and move to the small town of Destiny, Florida, with his unwelcoming and unfamiliar Vietnam veteran uncle.  With the help of a new friend, the comfort of a love of music, and an intriguing mystery to solve, Theo hopes he can somehow find a place to belong in Destiny.

Lou Montgomery has a magnificent voice, a sensory processing disorder, and a mother who isn’t quite up to being a parent.  When child services separates her from her mom, Lou is devastated and scared.  Forced to live with an aunt and uncle she’s never met before, she wonders if there is any chance that this change could be for the better.  And if so, where does that leave Lou’s mom?