Vampires and monsters and ghouls, oh my! If you’re looking to add some gruesome chills to your fall celebrations, we’ve got some books for you! The fainthearted need not apply, but to all our fellow thrill seekers . . . enjoy at your own risk! <Mwahahaha!>

The Coldest Girl in Coldtown by Holly Black (9th grade & up)

A Coldtown is a walled city where vampires live in quarantine, keeping them isolated from all humans except the ones foolhardy or desperate enough to dwell amongst them.  In the aftermath of a disastrous party that left most of her friends dead, Tana has no choice but to attempt to travel to her local Coldtown in the hopes of saving her infected ex-boyfriend, with the assistance of a mysterious new acquaintance.

The Last Apprentice: Revenge of the Witch by Joseph Delaney (6th grade & up)

Every town needs someone to keep the people safe from the boggarts, witches, ghosts, and other creatures that go bump in the night.  Old Gregory has served that role for many a year, but his time is growing short, and someone must take over the dangerous but vital job.  Enter Thomas Ward.  Since every other eligible apprentice has failed spectacularly (some with deadly consequences), Thomas is the last hope -- and everyone depends on his success.

Two best friends, plus one beach house, plus no parents, equals the best high school party ever!  Or at least that’s what Meg and Minnie hoped when they lied to their parents and showed up at an isolated island gathering. But when the partygoers start dying, they wonder if this decision will cost them their lives.  This homage to Agatha Christie’s And Then There Were None is a blast! 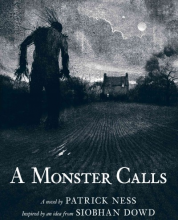 A Monster Calls by Patrick Ness (7th grade & up)

Conor’s mother is slowly dying of cancer.  His father has checked out of the family and started a new one halfway across the world.  Thanks to school, days are miserable, full of loneliness and bullying.  But at night, Conor suffers from a horrible recurring nightmare that gets even worse when he wakes one evening to a monster at his bedroom window.  This is a creepy tale that has its roots in loss and truth -- a mix of imaginary horror and real life sorrow that will certainly leave a mark.

The alien invasion humanity has feared has finally arrived, not in spaceships with fancy technology, but instead in the form of a rain which drops seeds that grow into monstrous alien plants that are toxic and hungry.  Everyone seems to fall victim to these deadly growths, except for three teens on a remote island who appear to be immune to the gas and secretions the alien plants emit. The trio is running out of time to figure out why they aren’t affected, and how they can fight the invasion -- before the next rainfall brings more death and destruction.

When Makani is forced to move from Hawaii to her grandmother's home in Nebraska she is sure she'll die of boredom -- but now it seems she might fall victim to something a little more serious than lack of entertainment. There's a killer on the loose and no one is safe . . .

Be prepared -- Perkins goes for high levels of shock value in this horror tale.

Seven teens suffering from debilitating sleeplessness agree to take part in an experimental procedure in the hope that it will cure their ailment.  Unfortunately, right at the beginning of the study some lab equipment malfunctions and the group becomes trapped in a horrific shared dreamscape that they must work together to escape -- or they’ll never wake up again.

If you didn’t have insomnia before you read this book, chances are that will change by the time you turn the last page!

The Sacrifice Box by Martin Stewart (8th grade & up)

Five unlikely friends find a box hidden in the woods and perform a ceremony meant to seal their bond forever.  They each put a childhood treasure inside the box, vowing to never come to the box alone, never open it after dark, and never take back their sacrifice.  Four years later, the high schoolers are no longer friends, but something is drawing them back together. Someone has broken the vow and evil has escaped.  Make sure you read this one in a well lit room, preferably in the middle of the day!

Anders is a high school senior, but already gaining fame for his amazing guitar skills and the success of his band Last Things.  He has a life anyone would envy -- until he doesn’t.  Suddenly, strange things are happening, and Anders can feel danger sneaking closer every day.  Is his newest fan and most ardent admirer Thea to blame, or is she the only one who can help?